A Texan Bayou, a pair of young raccoons, a world famous gator wrestler, the legendary Sugar Man himself and a whole mess of wild hogs running your way. If that doesn't get you excited, well then, brothers and sisters, I don't know what will. 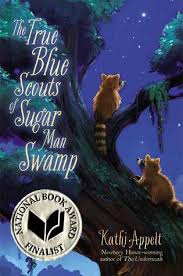 What makes it so good:

Kathi Appelt's novels came across my line of vision as I started prepping for my thesis. My own project is a Middle Grade novel about domestic cats, which also happens to feature a raccoon as a supporting character. Well, this novel is sort of an inversion of that. Its primary heroes are a pair of raccoon brothers - brave Bingo and fastidious J'miah - and among the supporting cast is a domesticated cat, the often ignored Sweetums. But here the similarities start to fall away, which I am very glad of, since I would hate to have to live up to this novel by tredding the same path!

Yes, it is that good. Scouts is delightful start to finish and Kathi Appelt's novels are a masterclass in "what literary middle grade fiction looks like." Her work is oozing with voice and personality. In the case of Scouts, this comes in the form of an omnicient narrator that bounces back and forth between the many disperate story threads. At one moment the narrator might be following the efforts of Bingo and J'miah to wake the Sugar Man and the next, it will be detailing the dastardly exploits of the greedy land developer who wants to turn the swamp into a gator wrestling park.

But the whole story is tied together by that one narrator, whoever it is. The  story is told like an old American Tall Tale, the kind you might hear on an old fashioned radio show. This isn't a book that addresses it's "readers." It's got "sports fans" and "mothers and fathers." To say the least, I was sold on the book the moment I got to the end of the first chapter and read this:

"Every denizen of the swamp knew that the wrath of the Sugar Man was something to avoid.
He also had a rattlesnake pet, Gertrude.
Crotalus horridus GIGANTICUS (also known as CHG).
Brothers and sisters, the stakes were high."

To say the least, the book demands to be read aloud and I've heard the audiobook is fantastic. If you do read it aloud, don't be surprised if you find yourself accidently speaking in your best approximation of a Southern Accent. You can just feel your old grandpappy telling you this story on his back porch.

On top of that, the action is fun and exciting, the characters are charming and memorable and the ending is oh so satisfying. This book is very worthy of the pile of awards being heaped on its head.

If those looping, twisting plot threads sound confusing, then rest assured, Appelt takes the time to catch her readers up. In the end, it's actually pretty straight forward. Indeed, most criticisms I've seen of the book were that it can get repetitive. Take the story of the wild hogs, for instance. Numerous times the narration bounces back to the hog family, all running towards Sugar Man Swamp, hoping to get a mouthful of the famous, delicious cane brake sugar. And honestly, the action never changes much in the scenes involving them. Every time you see the pigs they are still running towards that same swamp chapter after chapter. Each one of those chapters really do read about the same.

Now, this personally didn't bother me. I thought the hogs were hilarious and they added another layer of personality and comedy to the book. But I can see where repetitive scenes and descriptions like these might not work for some readers. I think whether or not this becomes a problem for you depends on how much you connect with the voice. I was there 100%, but for someone less keen, there are quite a few moments that don't exactly move the plot along.

Really, these asides reminded me of watching a stand-up comedian whose gone off on a thread away from his main joke. If you think he's great, you will watch him ramble and be perfectly happy. It might even be where some of your favourite parts of his sketch are. But those who are less sold, I think, find themselves wondering when he's going to make his flippin' point.

Books often have those moments too. How long we're willing to let the plot be derailed is often a function of how much we like the way the story is being told. If we love the world the author has created - through voice, setting, character, you name it - we'll have more patience waiting for the plot to take over again.

For a good example of this in action in another book (or series, as the case may be) I submit the Harry Potter series. There's a noticable switch around book 4 where the books about doubled in length. Previously, Harry's adventures had to be tight and generally focused on the over all plot. The first three books don't have very many wasted moments and remain pretty tightly focused on the over all action of the story. But by book 4 that changed. Rowling was famous and her fans wanted to remain in Harry's world as long as humanly possible. They wanted every detail of the lives of Harry and his friends. Here, again, Rowling had a fantastic voice (hers came more through world building and character, rather than a quirky narrator) that readers just wanted more and more of. So the trips to Hogsmead got longer, the Yule Ball got grander and the supporting cast grew and grew. If the later books aren't as tight as the first ones (they aren't), it's because we asked for it.

So returning to The True Blue Scouts of Sugar Man Swamp, maybe read the sample chapters on Amazon, and if you find yourself smiling at that folksy voice, get your hands on a copy. You will love it. If you think it's only okay, get your hands on a copy anyway. You'll probably still like it, just not think it's the best thing since sliced bread. No one seems to really dislike this books. It's more a matter of whether you adore it or not.
Posted by Emily Paxman at 2:07 PM No comments:

For a long time I've been very passionate about books, stories and everything affiliated with them and frankly, I love to talk about all of them! Writing, reading, you name it.

Maybe I'm slow on the uptake, but it kind of finally came to me that a blog might be a good place to have a conversation about books. I know, SUPER novel idea there. But anyone who wants to participate in this "book related conversation" can feel free to do so. I've got a few ideas for how I want to get this ball rolling.

So what types of posts can you expect to see here? Well! You may see...

1) Book Reviews!
Right now I am finishing up my Masters of Fine Arts in Creative Writing and I'm specializing in writing for children and young adults. To say the least, that means I'm reading a lot while I finish up my thesis. I'm going to say right away that I don't so much plan on reviewing books that I don't like. I'd rather endorse the ones I do. That being said, no book is perfect. I hope to dissect both what makes a great story work and also what can be done to improve one. Once in a while, I may also review movies and apply the same academic rigour that goes into anything I just want to nerd out over.

2) Topical Editorials!
As mentioned, I'm finishing my Masters right now, plus I am in the process of querying my first novel. As such, I have a LOT of thoughts on a LOT of things when it comes to the craft of writing, university writing programs, querying agents and relying on cats for emotional support. Expect occasional discussions of literary tropes and tools of the trade. And rambling discourses on plot mechanics. Oh mercy, plot mechanics.

3) Writerly News!
So - let's be honest - just about EVERYTHING a writer does in life can often be spin doctored so it seems to be about writing. For instance: I own three cats and am currently writing a novel about cats. So in theory, I could just post about how my Siamese overgrooms herself. But I'll try not to do that. Look for news regarding my thesis, conferences I attend (I'm hoping to get to AWP in February!) and, of course, the ongoing slog of getting a first novel published. Hopefully this last goal won't end in depression and dejection, but hey! Even that makes a decent story. :)

Finally, expect to hear about my garden. And my cats.
Posted by Emily Paxman at 1:09 AM No comments: