Welcome to the new Tropes VS Tropes series, where we celebrate the tools of fiction and ask ourselves, "who did it best?" As discussed earlier, a trope is a commonly used literary device or plot element that an author uses to call up a quick set of associations in the reader, so that they can build a story more quickly/easily.

Last time I discussed The Plucky Girl Goes on an Adventure (a surprisingly common trope in early children's literature) and then solicited my readers for suggestions for future articles. I got some great ones, which I hope to dive into soon, but one thing I noticed was that all the suggestions tended to be character related, possibly because the examples I gave in that first post were character tropes. But tropes can extend far further, and to give an example, I'm doing one that isn't a character trope at all. Today, we're talking about what (after elaborate clothing) is probably the most favorite thing of every long-winded fantasy writer on the planet. FOOD!!!! Full disclosure: I have never read the Song of Fire and Ice books, probably because I am a terrible person, but you know what I DID know? Without ever having read the books or watched the shows, I knew if you Googled "Game of Thrones" and "Feast" the internet would throw down with some awesome photos because in fantasy novels, feasts are serious business.

In speculative fiction, food is one of the main ways that authors worldbuild. You can learn a lot about a culture by what and how they eat. Feasts also provide a chance to see what your fantasy culture is like when it celebrates, plus they provide opportunities for the characters to mingle and have intrigues. They rank right below "the prince is holding a ball and invited all young maidens" for socially crucial events. One does not miss the Feast.

But if you had to attend a feast in a marvelous world, what one should you pick? With so many to choose from, I have narrowed the list down to four, all coming from children's lit, since that's my area. But I'd love to see someone better versed in the feasting of adults do something similar!

AND THE CANDIDATES ARE!!!!!

The feast scene isn't one of the more familiar parts of Peter Pan, and I can only think of one adaptation that features it at all - Hook. In it, a now adult Peter joins the lost boys for a feast only to see that there is literally NOTHING adorning the silver platters. As the boys reach for this pile of "nothing" Peter grows more and more frustrated, since they keep insisting there's food in there. This spirals into an argument with their leader, Rufio, and finally, playfully, Peter pretends to dig his spoon into his empty bowl and "throw" some of the nothing at Rufio.

And right at that moment, as he chooses to pretend the food is real, a real glob of florescent whipped cream hits Rufio in the face.


It's so magical. It's so lovely. It's such a perfect example of how fantasy feasting can paint a world just right. The power of imagination is so potent in Neverland, it literally makes food appear. It's possibly the best fantasy feast ever because it's practically a post-modern fantasy feast where one actually feasts on fantasy.

Except in the book, that isn't how it works at all. In the book, Peter Pan is much more Fey and he actually CAN'T TELL THE DIFFERENCE between when he's only pretending to eat and when he's actually eating. And because they're the same to him, he expects the Lost Boys to treat make-believe food the same as real food and if they don't, he get's angry, because in the book, Peter is a fabulous, tyrannical dictator and Thou Dost Not Tell the Peter there is No Food. Instead, the Lost Boys just go to bed hungry because Peter is insane and oh my gosh, do I love that book.

But I'd much rather go to a feast that I was confident would actually exist.

Being about hunger, it's not surprising that food plays a key role in Suzanne's Collins books. When Katniss arrives at the decadent capital, the shallow populace is constantly eating. They eat so much, they make themselves throw-up so they can eat more. Famously, during her audition in front of the judges, they grow bored of watching her and start feasting and she gets so annoyed, she shoots an arrow through the apple of the suckling pig.


The Hunger Games provides a decent example of using feasts to further the plot, whether Katniss is shooting apples or dancing with Plutarch Heavensbee. But overall, Katniss is so judgey of all the feasting, the reader never really wants to attend one . For some reason she finds feasting a bit uncouth when everyone's starving. Really harshes on the awesomeness of feasting.

It's not all bad, though. Katniss does rave about the lamb stew, but I think I'd rather feast somewhere that I don't have to feel terrible about myself for enjoying the food or where an angry rebel might try to shoot me while I eat.

When Harry arrives at Hogwarts and has his first feast in the Great Hall, I think it's fair to say that all of us go veritably INSANE with joy at the thought of joining in. Everything is either British or magic or both and I think it's fair to say that British food never sounds so good as when J. K. Rowling describes a neglected orphan feasting on it.

Potter is one of those series that has spawned legions of recipes for fans to imitate - from pumpkin pasties, to butterbeer, everyone wants to replicate the Great Hall feasts. Who doesn't want house elves prepping their food and making it appear as if no one needed to order it?

Of course, the underlying house elf tensions that fuel the feasts are a bit uncomfortable come book four, but c'mon. Look at that feast! LOOK AT IT!!!!

But... I must admit, I don't think this is the best feast out there. It's probably the best location. And it's got some cool foods added from the magic of the world. But most of it is sweets. Where are the main courses that you can only eat in the Potterverse? After you've sampled all the sweets and drank you're Butterbeer, you're going to be kind of jittery and buzzed at the same time, but what about a proper meal? You know, the HEART of a FEAST????? 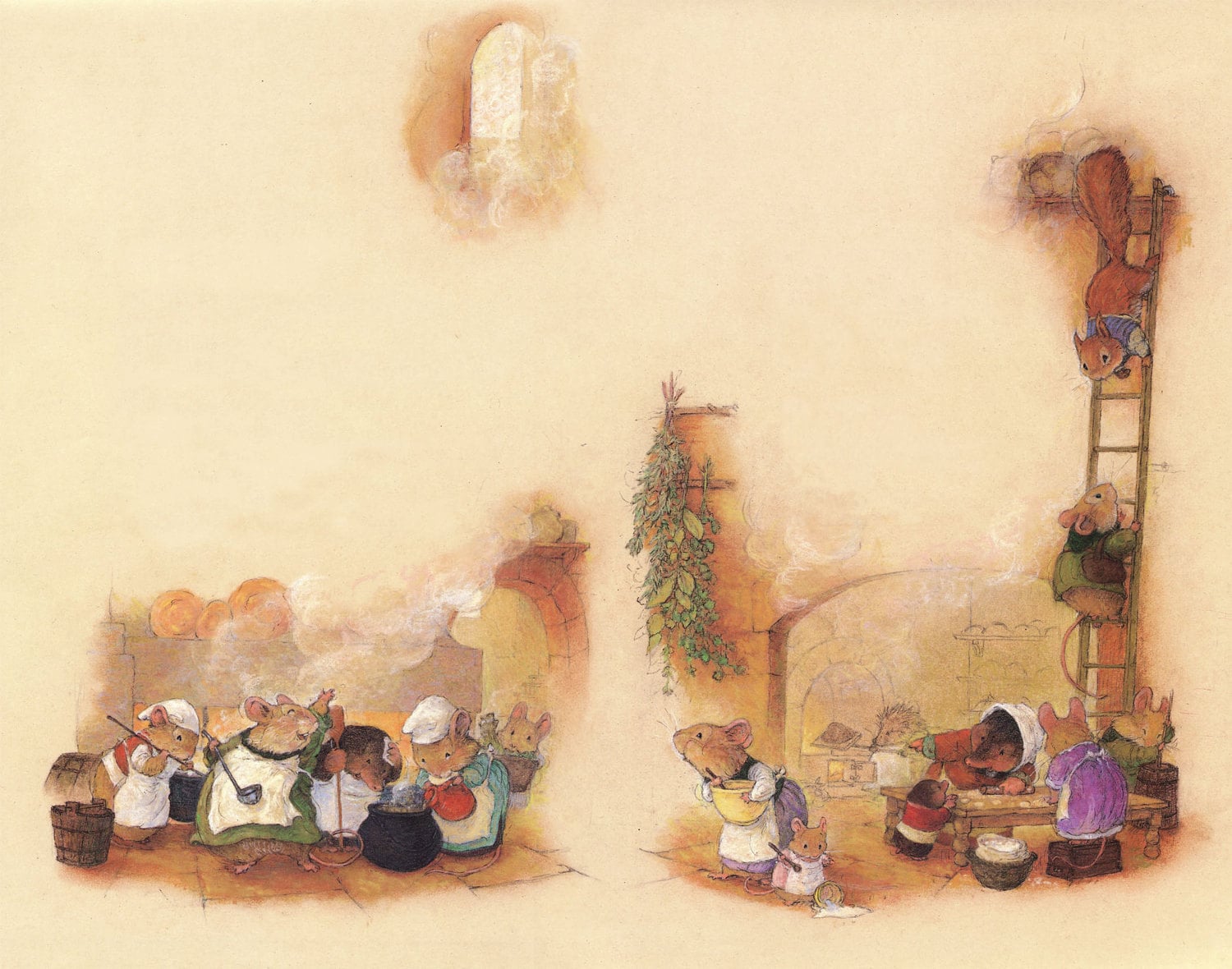 We all have books from childhood that we can't entirely explain our obsession with. Books that we loved so dearly as kids, but then we start to notice some of the flaws of as we get older. For those who aren't familiar with them, the Redwall books are about mice and moles and otters and hares and badgers and other nice, English animals living in an abbey and... they're sort of monks, maybe?

Every book, they get attacked by evil English animals, like rats and weasels and voles and stouts. Sometimes even cats show up. One character got attacked by a nasty pike. And then they must save Redwall Abbey!

One of my toughest realizations in adolescence was when I came to terms with the fact that every book in the series had essentially the same plot and characters, going through the same motions. But one of the most important repeated elements of these books is that Redwall is not only under attack, it's under siege. Supplies must be managed carefully, because running out of food is not an option. You see, running out of food is the worst thing that could happen to a Redwall mouse, because those animals LIVE for nothing but hardcore FEASTING!!!!

I can't tell you how many times I have wanted to eat the shrimp gumbo that the otters always make so hot, they're crying after. Or Abbot Durral's Seventh Season Cake, which is always shown in meticulous preparation. Or the shrewbread or the salads or EVERYTHING. Redwall food is so vast, there is a Redwall cookbook now, with seasonal recipes, and I cannot tell you how much I want it.

The feasts in Redwall took several chapters - from a character suggesting one, to the preparation, to everyone finally eating, to everyone lounging around in a food coma after. It was amazing! AMAZING!!!! There was a small chance a group of stouts or rats would attack while you were feasting, but this is a small price to pay if it means you get to sample the spring trout.

In many ways, Redwall genuinely was about the feasts. You want to see the mice and their allies save the abbey over and over, because you want them to protect the homey, good feeling about the place. A feeling that is best personified by their intense love of food and sharing it with others. So yes, I genuinely believe that the feasts were a major part of why I loved those books so much.

I might want to live in Hogwarts castle more than I do Redwall Abbey, but even the Potterverse could learn a few things about feasting from these mice. They know what's going on.