As awards season takes hold, my interest in the movies can't help but increase. It's enjoyable, watching the press squabble over what deserves to bring home the big trophies and reading the think pieces about whether or not the Academy is "in touch" with the common viewer anymore.

And like a lot of people who don't go to the movies all that often, I definitely use the awards as an indicator of what I might be interested in seeing that I missed during the hectic Christmas season.

That in itself is a juggling act, because I don't tend to like watching too much violence or sex in my movies. So I also spend a lot of time reading over reviews and rating guides, trying to figure out what I'll enjoy and what will send me running out of the theatre, crying like a five-year-old.

You would think it wouldn't be that hard - that some rule like "skip the movies rated R" would work for me, but it really doesn't. It's incredible how much violence - gun violence in particular - can make it into a PG-13 rated film. And similarly, it's confusing to me why a movie that essentially has nothing but a few F words gets slapped with an R. Some of this is my own personal preferences, but I'll take cussing over guns almost any day.

Of course exceptions apply, and this is sort of the point of the whole post - that the rating guides are arbitrary and so are individual tastes, which makes categorizing based on content incredibly difficult. But adding to the trouble is something we don't often think about enough - movie ratings aren't just content indicators, they're audience marketing tools. 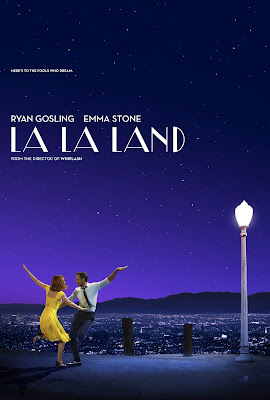 Which brings us back to awards season - this awards season, to be exact. One of the big, splashy movies that everyone is talking about is La La Land, an old fashioned musical about love, art and the movie industry. It's gorgeously shot and orchestrated, Ryan Gosling and Emma Stone turn in charming performances and the art direction is on point. If you're on the fence about seeing it, I really enjoyed it, so take that for what it's worth.

It's also rated PG-13 for one - literally, only one. I counted - use of the F word in the entire film.

There is no sex or violence, and only mild cussing throughout the rest of the film. If it hadn't been for that one word, it absolutely would have ended up with a PG rating. In fact, the language is so mild in the rest of the film, I half wonder if it could have pulled a G.

So why did they include that word? Did it add to the story? No. Was it particularly funny? Not really. Was it essential to characterization? No, can't say it was. The one purpose it served was raising the rating.

La La Land is far from the only movie to use this sort of ploy. There's a whole slew of animated movies that include one or two jokes that are just a tiny bit racey so that they can get a PG rating instead of G. Did you know Inside Out was rated PG? What an edgy film, amiright?

The reasons for both of these decisions are the same - marketing. Movies have no way of signaling to their potential audience who they are intended for except through the content rating system.

When you go to the bookstore (yes, this IS about books on some level), you generally won't find any content ratings. Maybe the Erotica is shelved separately from the other books, but even then, you don't see a warning notice above it. Your ten-year-old could head into a bookstore at any moment and pick up a copy of 50 Shades of Gray, but they don't generally do that. Why? Well, because it's not in the kid's section.

That's the genius of bookstores. They shelve by audience, not content. If a story can cross-over between two different audiences, it tends to have copies shelved in both, so you'll find Catcher in the Rye both in the YA section and among the literary classics in the adult section. It's also why you'll find Margaret Atwood shelved both in General Fiction and Sci-Fi. She's considered appropriate both for the nerdy and the literary set.

In the absence of a similar ability to "shelve" movies, the rating system has become the next best thing. G = Picture Books, PG = Middle Grade, PG-13 = Young Adult and R = Adult. Or so it seems. If film makers want to communicate that their project is a "Family Film," intended for more than the tiniest of tinies, they tend to think they need a PG or PG-13 rating. In La La Land's case, it wanted to position itself as an adult film, and people are okay with the notion that adults might enjoy something that's also appropriate for teens. That's not TOO babyish, right?

The funny thing about this shelving strategy, is that it becomes all the less logical when books actually get adapted to film. A YA book might come out anywhere on the scale of G (Like Anne of Green Gables) to R (Like Perks of Being a Wallflower). One of the great conundrums of adaptation is that our cultural standards for books and movies are so incredibly different. In books, it's not so much what the story contains, but how it engages the subject matter. Harry Potter is about death, war and racism and is appropriate for your ten-year-old. Wolf by Wolf is about all those same things, and it isn't. But they aren't next to each other in the bookstore, so it doesn't really matter.

You can tell there was real anxiety that La La Land might not draw in its intended audience if it didn't send the signal that it was meant for older viewers. And I do tend to agree with their decision to market the movie to adults. Some older children might like it, but it's not precisely a family film. Tonally, it's appealing to someone else - someone who wants their spinning, happy musical to include a touch of melancholy. So it strikes me as kind of a shame that in order to "shelve" it, they had to include one word that feels oddly dissonant in the rest of the movie.

I'm not sure what a rating system that worked based on audience rather than content would look like. Perhaps people would hate it, since it wouldn't officially "ban" kids from seeing adult movies. But I could go for it. And it might finally end some of the angst film makers have about how many cuss words to use in a movie.
Posted by Emily Paxman at 9:03 PM